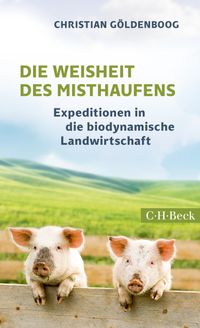 The Wisdom of the Dunghill

“Bio” and “eco” are trending right now. But not all “bio” is created equal. At its most far-reaching “biodynamics” has been translated into the principles of a close-to-nature agriculture with respect for the animals, the plants and the soil.

Christian Göldenboog takes us to places in Europe where biodynamic agriculture is practiced most faithfully and passionately. His thoroughly enjoyable reports describe how people think and act, who want to be socially responsible and at the same time make our food better and tastier. He introduces us to the farmers of the Dottenfelderhof near Frankfurt, where the Demeter League was founded in 1954, but also oenologists like Jean Baptiste Lécaillon, who is converting the world famous champagne house Louis Roederer to biodynamics. Especially in viticulture, the most elaborate and expensive form of agriculture, in which everything depends on the taste experience, there has been a shift toward this form of agriculture that was originally founded by Rudolf Steiner based on Goethe’s scientific writings. At the same time, the organism principle, the cornerstone of biodynamics that favors selfsustaining systems, has now taken hold in the sciences as well. Although skeptical at first, Christian Göldenboog becomes increasingly convinced that biodynamics is a viable alternative to conventional agriculture and its benefits can be seen, tasted and smelled.